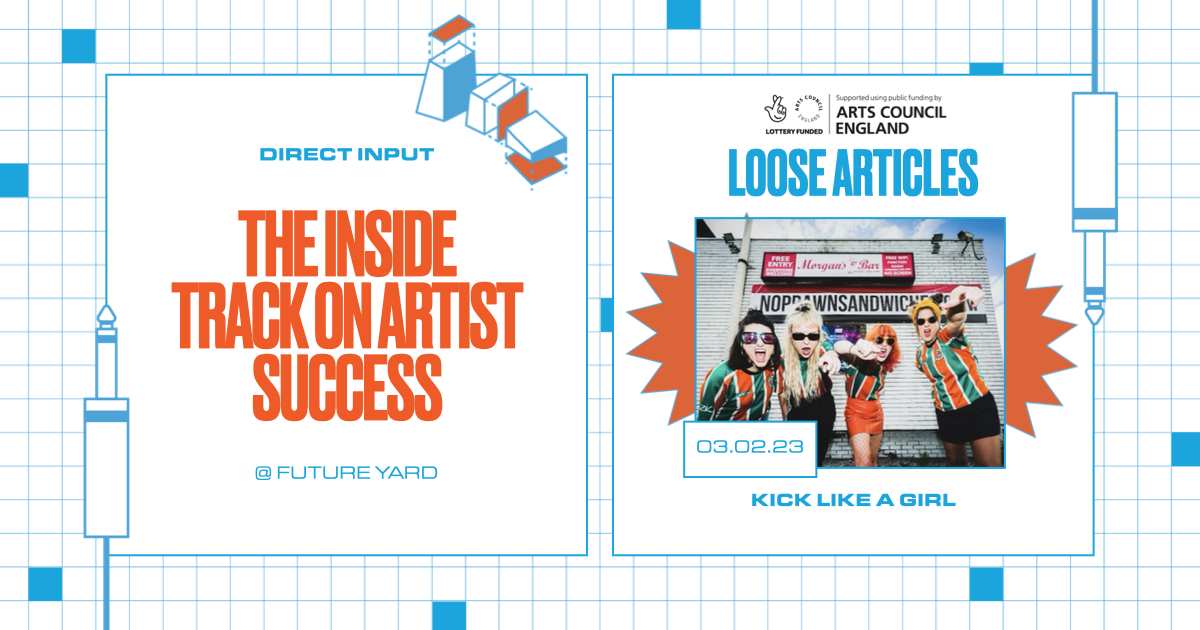 Manchester punks Loose Articles are delighted to announce news of their Arts Council England-funded Kick Like A Girl touring project running throughout Jan/Feb/Mar 2023 across grassroots venues in the north of England.

We’re delighted to host them as part of this tour and grab them for a special in-person edition of our Direct Input in our new workshop space upstairs at Future Yard at 6pm on show day. Girls/women will also be granted guestlist to the gig in the evening (for everyone else, tickets are available here for just £5). They will also be invited to to be part of the band’s music industry journey with early invites to tours, the opportunity to join a gig buddy scheme, attendance at special events, and they’ll signpost you to music industry opportunities that are happening locally.

In support of the project, Loose Articles will be launching LAFC—an inclusive fan club with exclusive merch, WhatsApp group, postal address, big days out, and a way for an expanding network of fans to get involved with the band.

Recently winning themselves support slots with Pulled Apart By Horses, Sea Power, and Billy Nomates, the quartet are presenting an alternative touring model with their own headline dates next year.

Giving inclusive, intimate access and entry-level insights into the music industry whilst supporting grassroots venues and northern creatives, the band invite you to join them on their musical journey, and will be sharing the secrets of what it’s really like to be in their shoes.

Aimed at primarily engaging young women (14 – 25) from backgrounds and groups who typically aren’t represented in the music industry, the band will illuminate the pathways into the often male-dominated music scene with community outreach locally via the Lancashire Music Hub.

Commenting on the project, the band say: “Music is such an important way to connect with people and get your voice heard, particularly when it’s in a grass roots music venue where you live. As northern women we have so much important stuff to say and a different point of view to offer. With this tour we really want to build a community with people like us, and show young women (and men) in the north west that the music scene isn’t just for boys.”

The ‘Kick Like A Girl’ tour comes just before the band jet off to Austin, Texas in March to take part in America’s most important emerging artist showcase, SXSW, where they will be playing a number of shows.

Come down to a show and join the LAFC of strong, like-minded, music-obsessed women!

RSVP for Direct Input session, plus guestlist for gig (girls/women)