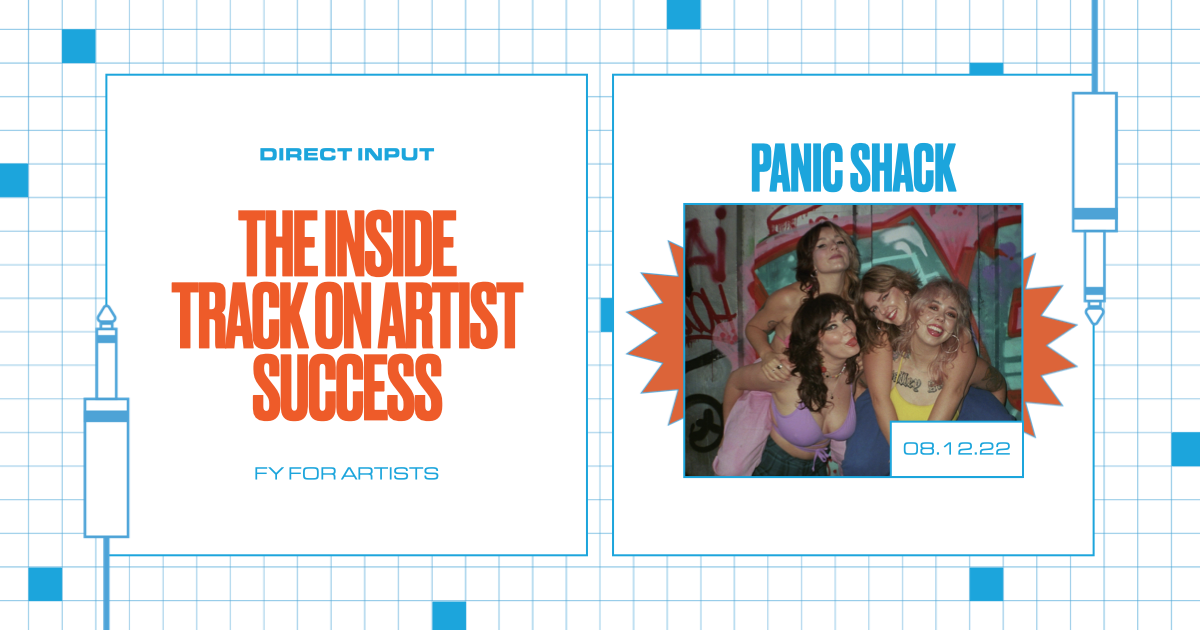 Our Direct Input series started during lockdown as a programme of online chats with artists and bands that we think are inspiring and do things their own way. The purpose of this was to show our community that this industry is certainly not one size fits all and there are different ways of putting yourself out in the world based on your values, personality and of course your music. As we’ve expanded our programme for artists and bands we’ve added loads more elements to this series to help give you all the goods to make decisions about your projects, but chatting to bands and artists about their projects is still super important. We want to catch these bands at different points of their journey. Whether they’ve released a tonne of albums, to putting together their debut or even how they’re building up their early audience pre-first album.

For this episode of Direct Input, we chat with Panic Shack. An exciting band from Cardiff that are rising up through the ranks with support coming from all angles. They recently released their debut EP on Brace Yourself Records and were announced in the latest round of successful acts to receive extremely competitive funding from PRS Foundation’s PPL Momentum funding for artists at a tipping point. So what does tipping point look like for Panic Shack?

Panic Shack are Sarah Harvey (vocals), Meg Fretwell (guitar/backing vocals), Romi Lawrence (guitar/backing vocals), Em Smith (bass) and Ed Barker (drums), the band were officially formed in late 2018 as an affront to how music can feel like a ‘members-only club’ at the best of times, a phallocracy at the worst. They’ve since built a word-of-mouth following for their frenetic live show with barely a shred of music available online. “We started the band because we’d spent years going to gigs supporting our indie boy bandmates,” explains Lawrence “One day we thought ‘why aren’t we doing this ourselves, surely it can’t be that hard?’. In the beginning, we just wanted to give it a go and have a bit of a laugh, but now we can hopefully show people that music doesn’t have to feel like a ‘members-only club’ or as something that is out-of-reach. If we can do it, literally anyone can!”

Their debut EP release rounds off what’s been a huge spring for the band, who are currently on tour with Buzzard Buzzard Buzzard and have just had a non-stop weekend at BBC 6Music Festival that saw them headlining the BBC Introducing and Horizons stage and playing the Y Plas Students Union alongside Orlando Weeks, and even taking a ghost tour of Cardiff Castle for Steve Lamacq‘s 6Music show (listen back to that here should you dare). The band hit DIY Alive festival and The Great Escape in May, as well as playing a sold-out headline show at Clwb Ifor Bach and announcing their new club night, Luv Shack.

RSVP TO RECEIVE THE VIEWING LINK