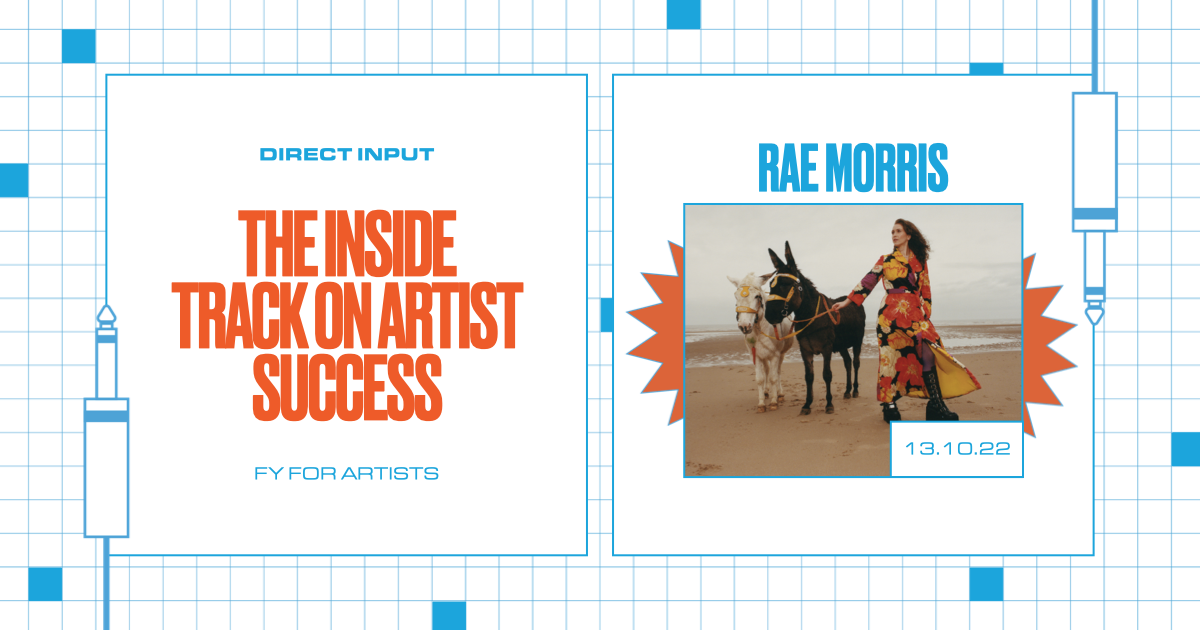 Our Direct Input series started during lockdown as a programme of online chats with artists and bands that we think are inspiring and do things their own way. The purpose of this was to show our community that this industry is certainly not one size fits all and there are different ways of putting yourself out in the world based on your values, personality and of course your music. As we’ve expanded our programme for artists and bands we’ve added loads more elements to this series to help give you all the goods to make decisions about your projects, but chatting to bands and artists about their projects is still super important. We want to catch these bands at different points of their journey.

Rae Morris joins us online after the release of her latest record Rachel@Fairyland. This third album is both a homecoming and a rebirth; a tender and staggeringly original record about finding solace in familiarity, as much as it is a celebration of defiantly embracing the unknown. Written and recorded after parting ways with her label of eight years – and prior to signing with RCA – Rachel@Fairyland is also the sound of the Blackpool- born star exploring her artistry utterly unfettered for the first time since she was discovered, in her mid-teens.

The experience of leaving her previous label was both liberating and terrifying. “In many ways, it was a massive relief being dropped,” the now-29-year-old singer-songwriter smiles, speaking from her home in North London, while nursing her baby daughter, Marla. “That was the thing I had been most scared about since the moment I was signed.”

A prodigious talent well-known in her native North West, Rae Morris signed her first management deal aged just 17, and was picked up by Atlantic soon after. Following a string of EPs, plus collaborations with Bombay Bicycle Club and Kaytranada, she received a prestigious BBC Sound Of nomination in January 2015 and scored a top 10 album that same month with her tender debut, Unguarded.

Though it appeared to the casual observer that Morris was on an unassailable trajectory with her emotive indie-folk, behind the scenes she was second-guessing everything, feeling the pressure to make back her advance. Looking back on the period now, Morris feels resignation rather than malice. “It was a perfect storm of everyone making the wrong decisions, myself included. Despite being constantly told that I was wise beyond my years, I just didn’t have the life experience to speak out.”

Morris was able to bury some of these anxieties when it came to writing the follow-up, largely thanks to the meaningful partnership she forged with co-writer Ben Garrett, AKA Fryars, whom she’d met while working on Unguarded. Not only were the pair creatively sympatico, they fell in love during writing sessions, a development reflected in the heady art-pop that made the record, Someone Out There.

Released in February 2018, the album received unanimously positive reviews, with industry titans like Imogen Heap reaching out to express admiration. It also provided the platform to propel Morris into the pop arena for the first time. Suddenly she found herself stepping out from behind the piano at shows, and fully exploring her capacities as a performer.

When Morris was dropped by Atlantic just months later, it was her now-husband Garrett’s support that helped motivate her to continue. “Ben basically interviewed me,” she laughs. “And as disheartened as I was in that moment, I realised that if the music is ambitious and you’re proud of it, it doesn’t matter what happens to it. I always just wanted to make music that had scope and scale.”

It was this mindset with which Morris entered into creating Rachel@Fairyland, in the August of 2018. Written with Garrett over the course of a year – at the home studio they built together – today Morris describes the period as “the best time of my life”. They were joined

by their close friend Sean O’Hagan of The High Llamas and Stereolab, whom Morris fondly refers to as “the third wheel in our relationship”, so integral was his role in the album’s creation.

“From Milton Nascimento to Cher classics, Sean brought new inspiration – and also pastel de nata from the market on his way over,” she recalls. “He was obsessively enthusiastic about the music whilst also undergoing treatment for bowel cancer. He practically keeled over turning up to the woodwind session on our last day of recording, before the Covid lockdown began. He puts music before everything, even when he perhaps shouldn’t.”

Similarly key to the creative process was mixing engineer Shawn Everett (Adele, Britanny Howard, Kacey Musgraves), whom Morris first met years earlier via Unguarded-producer Ariel Rechtshaid. Working on final mixes at a distance from his “laboratory-like” studio in LA, Everett used analogue gear to accentuate the nostalgic glow of Morris and Garrett’s original recordings. “We knew we wanted the record to sound like an old film, and he was the only man for the job.”

With this trusted support network in place, Morris was free to explore her vision uninhibited, and set about blending “very textual, modern hi-fi music with strings and orchestral sounds”, while pulling inspiration from an eclectic array of source material. Alongside the music of Jon Brion, Björk and Minnie Riperton, Joanna Newsom, Morris looked to the sound-world of her hometown, from the postcard jollity of the Pleasure Beach and the nostalgic grandeur of the Tower Ballroom to the gentle ebb and flow of waves lapping on the shore. Cinematic and otherworldly, while remaining deeply human, it’s a truly transportive set, and one that radiates an evocative warmth.

RSVP TO RECEIVE THE VIEWING LINK